You are here: Home / ScrApBoOK / Thank you, for everything, Your Majesty 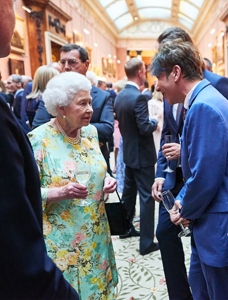 Farewell to a great lady.

We’ve gathered as a kingdom, as a commonwealth of nations and even as a world to pay tribute and reflect on someone who embodies a near-century of history. Our queen seems to have met an impossible number of people – she even met us. She  paused to chat, fully engaged, to our director Stephan Pavlou (left) when we were invited to Buckingham Palace on receiving two Queen’s Awards for Enterprise in 2017.

It feels now like we have all come together round a campfire at twilight to listen to stories of this woman, who vowed to serve all her life and did just that.  The Gaelic and Welsh languages wind themselves like smoke through the proceedings as we catch a glimpse of ourselves as part of something ancient.

The Queen does not appear to have been in the least bit materialistic – and we know great wealth has never stopped that trait in others. Nor was she interested in following fads and fashions. She seems instead to have preferred those values we might call humanity – a determination to look for the good in everyone, a love of animals, honest straight-forwardness and that all-important sense of fun that brings joy to life. All the time remaining some sort of pillar around which our democracy can function. We can only imagine how many  vainglorious presidents (mostly men I am sure), political scandals and hoo-ha she has saved us from.

Well that is what we are thinking now anyway.

So in the words of Paddington – someone give that bear an OBE! – we’d like to say thank you, for everything.